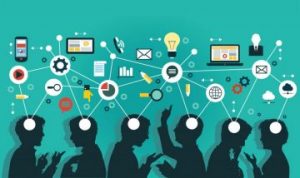 The young and their digitally connected families globally have highlighted over the last twenty-five plus years five conditions critical to the young’s natural sustained learning with the digital (Lee and Broadie, in press) (Twining et.al, 2017).

All five of the conditions are closely linked.

Vital also are parents who believe the digital is very important to their children’s education and life chances, a learning environment, a culture that facilitates and supports those conditions and a digital mindset that shapes the expectations and the use and learning with the digital.

If you pause for a moment and reflect you’ll appreciate those five conditions have also allowed you and the 3.65 billion plus ** others digitally connected to sustain your natural lifelong learning with the digital – at no expense to government.

With the advantage of historical reflection (Lee and Broadie, in press) and a contemporary study by Twining and his team (Twining, et.al, 2017), the five conditions, plus the importance attached by the parents and the supportive learning environment have been evident since the launch of the Web in 1993.  While in the next twenty-five years society moved from an analogue to a digital world, the percentage of the young using the technology skyrocketed, the age of the users plummeted and the digital mindset strengthened the five critical remained as important as ever.

In retrospect, they go a long way towards explaining why more than half the world’s young are digitally connected, using the digital in every facet of their lives and learning and are able stay abreast of exponentially evolving technology – with no support from government or most of the world’s schools.

Without the gear the young can’t use it in their learning.

History underscores the importance of the young having ready, 24/7/365 use of ‘their own’ relatively current digital technologies.  They need to configure it as desired, to ready it for their immediate use, to select the software and peripherals that fit their learning style, to continually upgrade its functionality and to appreciate the ownership of the kit affirms the trust and responsibility accorded them.

From the early 2000’s – but particularly since the advent of the iPhone in 2007 – the young have shown a strong preference for mobile technologies that allow them to learn anywhere, just in time, in context, when wanted.

The App Revolution allowed the young of all ages to personalise their mobile tool kit, and to use that desired. Where previously the functionality was built into the device from the mid 2000s and the shift to smartphones increasingly software solutions replaced much of the old in-built, allowing each of us to choose the apps we wanted.

Compare the apps on your mobiles with your partners and the kids and you’ll quickly appreciate the extent to which all of us have personalised, indeed individualised, our digital tool kit.

In 2016, a study revealed 42% of Danish children under seven owned their own tablet, and 91% had ready usage (Johansen, et.al, 2016).  Comparable figures will be found in all developed nations. They point to a young that will forever on expect to have and use their own mobile technologies 24/7/365.

The same young will expect, as they do now, to use a device, an app or to connect to network the moment desired. They, like you and me, believe they have the right to do so, and will moreover expect the connection to be fast and reliable. It has been the norm for young of the world for near on twenty years, a norm that has been strengthened by the increasingly sophisticated and convergent technology. The young, again like us, will expect to immediately take a video of the whale breeching off the beach, to check the details on Wikipedia, and to edit the video and add a voiceover before posting to YouTube.

Moreover, they will expect to be able to video conference with friends free of charge about the happening, and to show it to the family on a large HD screen.

Without that connectivity, most of the learning can’t happen.

Without the empowerment of, the trust in and the possession of the personal technology the young can’t normalise the use of the digital.

Nor can families or schools.

This has been evident globally – outside the school walls – since the advent of the Web twenty-five years ago when the first families empowered and trusted their children to use the digital astutely.

Since then millions upon millions globally have opted – seemingly naturally – to do the same.

While over the period the technology has become increasingly sophisticated, powerful and all pervasive, and changed all manner of practices the digitally connected families of the world have continued to empower and trust their children’s use and learning with the digital. The young have grasped the opportunity, fundamentally changing the nature of youth (Lee and Broadie, in press), exploring new worlds and pursuing their interests and passions, all comfortable using the latest technologies, with many becoming highly competent in their area/s of interest (Ito, et al 2013) (Twining et al, 2017).

Very early in the piece (Tapscott, 1998) the parents recognised that for the first time in history the young knew more about a domain of learning than their elders, and that there was much to be gained by supporting the children’s learning and the young assisting the family grow its learning.

From the outset in the early 90’s the parents opted – of their own volition – not only to empower and trust their children but also gave them the freedom to use the digital largely unfettered.

It is appreciated that in the 90s there was a mystic around the online and that many of the parents had little understanding of computing but over time as their understanding grew and they came to appreciate they had to better ready their children for the digital and networked world and more closely monitor the use they still allowed even the very young considerable freedom – albeit within the bounds agreed by the family, and unwittingly by the networked society.

While little is written, it is intriguing to note how millions upon millions of young people globally for twenty plus years have observed the universal operational mores and etiquette.

While the degree of freedom varied with the developmental stages and the responsibility shown the young of the world have for many years had the freedom to go directly to the learning of the world online, and by-pass the traditional gatekeepers.

They have moreover had from the outset the freedom to use the digital to create what they like and to communicate with whom they wished – more and more free of any toll – everywhere except in the school (Twining, et.al 2017).

From the early 2000’s the young globally have embraced the emerging mobile technology making it very much their own, central to their lives and learning, doing largely as they wish, particularly from the upper primary years upwards.

That connectedness coupled with the freedom accorded has and will continue to change lives regardless of any desires by those in authority.

The learning culture, the trust, empowerment, freedom and the technology all combine to allow the young to direct their learning with the digital lifelong.

It places them in charge of learning what they believe is apt, when and where, and with the support of whom.

They – and not some external party – decide when they need to improve their capability and how they will do so.

Tellingly history shows the young naturally taking control of their use of and learning with the digital from their initial use of the technology. If you’ve not already done so observe watch a two or three year using an iPad and you’ll soon find they want to take charge, to explore, to discover, to use if they want their thumbs rather than their index finger, disliking being told what to do, except when stuck.

Whether this is a natural trait time and research will tell.

Educationally from the outset of the young have acquired a core life skill they will use and enhance for the rest of life.

In placing the responsibility on the individual and supporting their efforts the families have grown the vital ability to naturally sustain the learning with the digital, that in a continually evolving world needs to be lifelong.

That core skill soon sees the young individualising their capability with the digital, and while many of the capabilities will be common, others, as with all of us will be distinct.

While taking charge the young are very ready to call upon others, particularly in the family or peer group the moment the need arises.

Few schools globally would in 2018 countenance these conditions in the student’s learning with the digital.

Reflect on your own.

Most schools still ban the in-class use of the young’s suite of mobile technologies. France for example in 2017 chose to ban smartphones in all its schools.

Digitally connectivity in virtually all schools is tightly controlled, with the teachers deciding when and if it permitted. Few would likely tolerate the idea of children instantly going online to find the information.

The school and its ICT experts know what is best. The children, the parents, and often most staff have no say, and are expected to comply with the school’s instructions.

The student use of the digital is tightly controlled and structured, very firmly based on distrust, with every student operation, often keystroke monitored.

Globally schools, at the behest of government, the curriculum authorities and the network managers, decide how – and how not – the children will learn with the digital, with no recognition given the out of school attainment or consideration given to the young learning how to take charge of their sustained lifelong learning with the digital.

Twining and his colleagues in the UK concluded

Schools seldom replicated how children’s digital practices develop outside school, especially with regard to providing opportunities for sustained and increasing participation with others who shared similar interests. Instead, children’s ICT use in schools tended to be short term and discrete (Twining, et.al, 2017. P.vii).

Not only don’t most schools support the five critical conditions but they don’t nurture in the young the ability and responsibility for naturally sustaining their learning with the digital lifelong. They are geared to a past world of constancy

Ask yourself what chance has my school, or that of my children, of meeting the five conditions critical to the natural sustained learning with the digital, that the young can draw upon and grow throughout life.

We suspect the answer will be none.

The next question is a huge one – what if anything is the school going to do?

The current very strong global trend is to do nothing.

And let the young will continue to develop their learning with the digital outside the school walls, continuing to deal the school out of the play.