The more we analyse the operations of the pathfinder schools in the UK, US, NZ and Australia the more strongly it appears it is only when schools move to a digital operational base do they begin to fundamentally change their form and embark on a never ending path of on-going change, evolution and transformation.

Schooling globally for the last fifty plus years has invested vast funds, time and expertise trying to innovate and change the traditional, largely Industrial Age mode of schooling.

It failed to make any sustained fundamental structural change. Any dents made in the ways of old were soon rectified as the innovators moved on.

Unwittingly and in an as yet largely unrecognised way the paper technology that those school’s operations was built upon reinforced the constancy and continuity.  There was no inherent quality in paper as a technology that stimulated change. Indeed the technology actually worked to reinforce the status quo.

In stark contrast the ever-evolving, ever more sophisticated, ever-more convergent digital technology, when coupled with its users ever-growing expectations and their increasing awareness of what is possible with that more sophisticated technology constantly works to stimulate the on-going evolution.

A quick look at the following expression of Moore’s Law, prepared for the Washington Post, provides an insight into the kind of evolutionary path along which the digital schools will likely move. 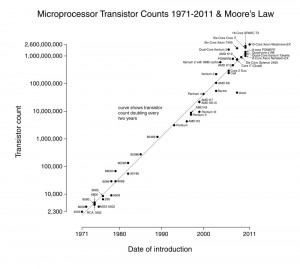 Children today in early childhood classes will likely on their school graduation around 2026 be using 24/7/365 ‘computers’ that may be self- aware and self learning, with all the concomitant opportunities and implications. These computers will be largely invisible, constructed into the built environment and the fabric of clothes as well as prosthetically embedded..

As you know from your own use of the digital technology, and in particular that of your children once one has normalised the everyday, 24/7/365 use of that technology and has incorporated it in every facet of one’s life we very soon have ever greater expectations of that technology and constantly envisage new ways how it can be used.  Where once getting modems to mate or using a search facility like Alta Vista was mind blowing today those developments pale into insignificance.

That is what is happening globally in the schools that have moved to a digital operational base. That said the pronounced transformation is only happening in those schools where virtually all of the school’s main operations, teaching and administrative are digitally based.

Critical to that development is having all the school’s teachers use the digital naturally in their everyday teaching.  The digital technology has been used in school administration for decades. It is only when all the teachers use the digital technology in their everyday teaching, as a group recognise the opportunities possible, envision the type of schooling desired in an ever more digital, socially networked and collaborative world and understand the kind of holistic changes school wide required can schools be said to be operating on a digital base. It is not enough to have 40%, or even 80% of the teachers using the technology in their teaching. It actually matters not if all teachers are digitally competent outside the classroom. All the teachers, permanent and casual have to use the kit in class with the kids expecting the use of the digital technology will be the norm in the teaching.

It is only when the schools leave behind the traditional paper based operation and mindset will the schools, like the business world beforehand and move to a digital operational paradigm and begin their dramatic transformation and on-going evolution.

Organisationally it is only when all the key operations are digital can they talk, converge and become ever more integrated.

While seemingly simple, the websites of the pathfinder schools with their quick and ready access to a tightly integrated digital communications suite, are only possible when the schools are operating on a digital base.

A look at the school evolutionary stages will reveal that transformation does not happen overnight but is graduated and only gathers pace when the culture, the school’s ecology is at ease with the all-pervasive use of the digital.

Sadly, and vitally unappreciated by many educators and politicians, the vast majority of schools in the developed world in 2014 don’t have 100% of their teachers using the digital technology normally in their everyday teaching..

Schooling in general lags well behind the general societal use of digital technology.

The only ways for schools to redress that shortcoming is to move to a digital operational base.

Impact of Digital Operational Base

It is apparent from the research we are undertaking on those schools globally operating on a digital base (http://www.schoolevolutionarystages.net) is that all are demonstrating a distinct suite of distinguishing attributes that already sets them apart from the traditional paper based school and are on trend to forever amplify that difference.

Schooling, as we have all known it, has been characterised by its constancy, continuity and its relative sameness.  It hasn’t fundamentally changed its form in the last 50 – 60 years.  While the trappings vary between nations and sometimes regions in essence schools operate on a fixed number of days each year, between agreed hours, within a physical place called school.  The teaching is controlled and conducted wholly by the professional teachers, with solitary teachers normally teaching class groups, invariably behind closed classroom doors.  Paper – used in conjunction with the pen and the teaching board, be they black, green or white – has been the core instructional technology for hundreds of years and largely unseen and unwittingly has profoundly impacted the nature of the schools, their organisation, operations and teaching.

Generation after generation of children have experienced basically the same mode of schooling and teaching, to the extent that all know what is entailed in the schooling of the young.

That is until recent years and only then with those schools that have moved to a digital operational base.

Seemingly overnight those schools where all of the teachers in the school use the digital technology in their everyday teaching begin to abandon the long established ways and practices of the traditional school and transform every facet of their operation.

The fuller details of that transformation that has occurred in the pathfinder schools in their journey to digital normalisation are fleshed out in the six school evolutionary stages elsewhere on the site.

On first glance someone visiting those schools, be they primary or secondary could readily mistake them for a traditional school.  Tellingly the transformation has occurred in the existing buildings, of all shapes and sizes, with invariably no major structural change. However as they delve further they’ll soon recognise that not only is their modus operandi already fundamentally different to the traditional school but they are also operating in a mode where in general terms they will forever continue to change, evolve and transform their nature.

That modus operandi is so different to that experienced in the majority of schools it bears spending some time examining some of the distinguishing changes occurring and reflecting on the implications for later adopter schools.

The plan is to explore key attributes over the next couple of months in a series of weekly posts, with a view to alerting all associated with schools – be they the clients, the providers of the education or the shapers of the national education – of the developments occurring and the likely implications.  We’ll explore the

It should be stressed that these attributes should be viewed in conjunction with the other writings on the site on the evolution of schooling, and that while each is addressed singly all are tightly interrelated and collectively add to the character and distinctiveness of the ever-evolving school ecologies.

In brief schools when schools shift to a digital operational base – go digital – they leave behind the constancy, continuity and sameness of the traditional school and