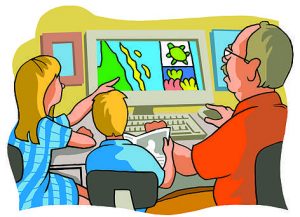 It will likely come as a surprise to most teachers and governments but the new reality is that the digitally connected families of the developed world are far better positioned than schools to grow the children’s being digital from birth, and to lead their learning with the digital.

At first glance this might appear an outrageous observation. However unwittingly, and largely unseen, the digitally connected families have over the last twenty plus years naturally and largely unseen developed the many strengths that give them considerable advantage over even excellent teachers working within highly constrained linear, hierarchical Industrial Age schools.

While the strengths of the family are on trend to grow at pace so too are the constraints on teachers, pointing strongly to the schools in their teaching with the digital lagging increasingly behind their families.

The seemingly obvious solution – exemplified in the exceptional schools and classrooms – is for the school to genuinely collaborate with their families in growing the children’s 24/7/365 learning with the digital. But – and it is a very considerable ‘but’ – at this stage in history no government, national or provincial appears to want that collaboration. The authors can find none that have articulated the educational, social, economic and political advantages of doing so.

All appear to want to maintain their unilateral control of schooling, and its traditional form and ways, affording only limited importance to being digital.

That said as a professional educator working within a digital and socially networked society, striving to provide your students an apt education for the contemporary world it is important to appreciate why the digitally connected families are so well positioned, to understand their strengths and why the trend line is pointing to the schools and teachers being only able to complement and add value to the work of the family.

The insight should help explain how teachers can add important value, but also why

the digitally connected families have led, and will continue to lead in growing the young’s being digital, and why schools in a networked society should be pooling the resources and expertise of the families and the school – not trying to compete.

The strengths of the digitally connected family.

The young and their families have in learning with the digital naturally, instinctively and unwittingly adopted a remarkably common approach worldwide, creating the same kind of supportive learning cultures, developing similar capabilities. Nationality, gender and the family’s finances don’t appear to vary the fundamental nature of the learning with the digital all that much (Chaudron, et.al, 2015).

However, history also reveals most schools lack that adaptability, unwilling or unable to change their ways, beholden to the set curriculum, assessment procedures, insisting the young and their families do what the school/authority requires.

There are undoubtedly other strengths.

Notwithstanding the above are an impressive set of capabilities.

Collectively they go a long way to explaining why most digitally connected families are far better placed than their local school/s to lead the way in learning with the digital and to do so in the years ahead.

They also affirm why astute schools and teachers would do betters to complement and enhance the contribution of the families, and not like now, try and compete.