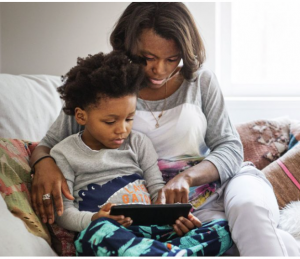 Children born into digitally connected families will likely by the age of three be displaying the key attributes of being digital: attributes they will evolve and naturally grow lifelong.

It matters not whether the families are in the developed, underdeveloped or developing world.

This development of the last decade, post the release of the iPhone and global uptake of the touchscreen technology goes a long way to explaining why near 70% of the world’s young are digitally connected (ITU, 2017) and two billion plus young people (UNICEF, 2017) have normalised the use of the digital and naturally grown being digital.

What we now know is that children born into a digitally connected family – a family that uses the digital technology invisibly in near ever every facet of its lives – will from the day of birth begin observing and mimicking the family’s ever use of the various technologies. By the latter part of the first year of life the children will likely try to operate mum’s smartphone. By the latter part of year two, but most assuredly by three the children will be digitally proficient (Chaudron, et.al, 2018), demonstrating the attributes critical to them taking charge of their learning with the digital, lifelong (Erikson, 2106), (Chaudron, et.al, 2018).

Significantly the children will have taken charge before they can read and write, they using what has been a largely latent inherent visual intelligence from birth to naturally grow their being digital.

Tellingly it appears the digitally connected families of the world have instinctively and naturally – and likely unwittingly – grown their children’s being digital in a remarkably similar manner, observing five key conditions (Lee, Broadie and Twining, 2018) – with no guidance or funding from government or its schools.

The educational implications of this historic global development are profound and game changing for parents, children, educators and governments worldwide – even if governments and their institutions choose to ignore the changes that have occurred. UNICEF in its Children in a Digital Worldstudy rightly concluded:

Digital technology has already changed the world – and as more and more children go online around the world, it is increasingly changing childhood (UNICEF, 2017, p1).

Nature of the learning

By three most children in their use of and learning with the digital technologies have instinctively adopted the same laissez faire approach used by the young of the world – outside the school walls. It is a highly fluid, unstructured, non-linear approach where the children learn informally, invariably through play, just in time and mostly in context, generally astutely guided and supported by the family.  Driven by an innate curiosity it is usually discovery based, highly integrated, with the children using all the facilities available to learn what they want, when they want.

Theirs is a digital, largely visual and aural world, where video is dominant and where they instinctively first look to the touchscreen technology to access the desired entertainment, communications facilities and information.  The early indications are that the very young increasingly use the digital, and particularly the visual and aural facilities to assist grow their vocabulary, speech and ability to write, both with the keyboard and in time with a pen. This has been particularly evident since the introduction of the multi-modal communication facility on touchscreen technology that enables children, particularly in the undeveloped world, to by-pass the QWERTY keyboard.

By three the very young are showing clear signs of taking charge of their learning with the digital (Chaudron, et.al, 2018), deciding what they want to learn and how – ready to tell nanny ‘no I want to use my thumbs to navigate, not my fingers’. Very soon each child’s learning is individualised, with seemingly all unwittingly acquiring a common suite of capabilities (Lee, Broadie and Twining, in press) while also growing the skills that allow them to pursue their interests and passions.

By three it would appear the young worldwide have adopted the same approach to learning with the digital, that they will use 24/7/365 throughout life.

The capability is succinctly, if surprisingly, summed up in the Mark Billingham’s 2018 thriller The Killing Habit.

‘Got one!’ Without a clue what was going on, Thorne leaned down to watch, amazed as always, at how frighteningly adept the child was with the technology. At how kids could play games like this before they could read, could open apps, and navigate screens before they could manage joined up writing. He remembered Alfie, eighteen months younger than he was now, trying to swipe the picture of the TV and announcing loudly it was ‘rubbish’ (Billingham, 2018, p 349).

The nature of the learning – as you’ll appreciate – is antithetical to the traditional highly controlled, ‘one size fits all’, expert determined, teacher directed, structured linear teaching used in schools.

Two billion young plus affirm the world’s young have no desire to use the traditional approach, and that there is nothing government or schools can do outside the school walls to change that reality. They can if they wish support, complement and add value to the children’s out of school mode of learning. But they are never going to remove the agency and control the young now have over a key aspect of modern life – except within government controlled classrooms.

Core to the sustained natural learning with the digital, and digital normalisation – as we elaborate upon in Your Kid’s Being Digital (Lee, Broadie, and Twining, 2018) – are five conditions, that families globally appear to have instinctively observed.

Collectively the conditions have worked to naturally grow the children’s being digital.

Being digital is far more than digital proficiency, and being able to use the evolving digital media 24/7/365 efficiently and effectively. It is about having a mindset, a mode of thinking, an expression of values, a set of ever rising expectations, an ability to draw on many connected elements, a way of learning and understanding how to learn, a taking charge of one’s own learning, being able to network, to accommodate accelerating change, to continually develop, lifelong (Lee and Broadie, 2018,a).

Proficiency wise, as Billingham observes, the children by three have demonstrated their ability to readily work the core functionality of the current personal and family digital technologies (Chaudron, 2015, Chaudron, et.al, 2018).

Well before they can read, write or begin school they have learned to use the visual, and increasingly the audio AI controls to navigate the networked world, and use the digital media to access the desired functions.

Moreover, they have learnt to use the various digital communications facilities, strongly favouring video.

With their strong digital mindset, their first step is to use the digital and the connectivity, with that propensity normalised before they start to read and write. The book to them is a second order technology

They are very much a digital, not a pen and paper generation.

In having the agency and capability to use the technology largely unfettered the children globally have shown they will – as they have for thousands of years – pursue their interests and passions, aided today with increasingly sophisticated and powerful digital tools (Ito, et.al, 2013). UK’s Ofcom for example has noted that in 2017 42% of 3-4 year olds used YouTube, up 10% on the year before (Ofcom, 2016, 2017).

While kids have always had this capacity in their informal learning the parent’s provision of the technology, connectivity and agency overnight removed the traditional adult gatekeepers of the information and gave children the freedom to access the resources of the networked world, the moment desired.

It moreover enabled them to decide the best approach to the learning. They – and not an adult – decide when to employ a discovery based, didactic or highly repetitive learning approach.

Similarly, each child chooses the digital tools they need for the task at hand.

The implications of the young being digital by three are profound and far reaching, for the young, their parents, families, schools and governments and society in general.

They are yet little appreciated, particularly by most educators, governments and the media – that appear to be more focussed on the dangers of the technology rather than the profound impact it has had, and will continue to have worldwide, both on the up and the down side.

It has, as the UNICEF study (2017) notes changed the nature of both youth, and youth education – albeit outside the school walls.

It is vital the young as they mature better understand the implications of taking charge of their learning with the digital, learning how to learn and becoming increasingly autonomous learners.

While 70% of the world’s young are digitally connected 30% are not. They are, educationally, socially and economically disadvantaged.

Connectivity can be a game changer for some of the world’s most marginalized children, helping them fulfil their potential and break intergenerational cycles of poverty (UNICEF, 2017. P1).

The parents of the young need to better appreciate the many implications of playing the lead role in growing their children being digital from birth, to understand the family’s educational strengths in this area far outweigh the schools (Lee and Broadie, 2108, b) and that they cannot rely on the schools to assist grow their children taking charge of their 24/7/365 learning with the digital.

Schools and governments need to grasp that they have no control over the world’s young growing their being digital, and never will while ever they continue with their insular, school focussed, structured, ‘control over’ approach to digital learning, and dismiss the learning occurring naturally in the families from birth.

Governments could better assist by investing a fraction of the millions spent on technology in schools by giving the monies directly to the families in need.

By the age of three the die is largely cast on the young’s adoption of their approach to learning with the digital. As the children mature and naturally grow and evolve their being digital so they will develop as largely autonomous learners and do so lifelong everywhere – other than the classroom.