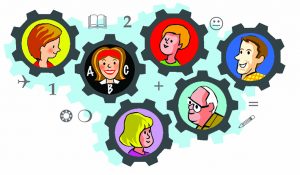 In moving to a digital operational base the school begins collaborating evermore closely and genuinely with its homes and community, in time marrying the in school teaching, learning and resourcing with the out of school.

It is a marked contrast to most traditional schools where most of the collaboration with the homes is tokenistic (Lee and Ward, 2013) and often one way, with the school informing the parents what they need to do for the school (Grant, 2012). While the literature, government policies and the research (Hattie, 2009) have long advocated genuine home-school collaboration it has rarely been achieved in a significant way until recently (McKenzie, 2010) with most parents reluctant to enter the school gates.

All that invariably begins to change, and to change rapidly and markedly when the school goes digital, and the principal and the teachers begin using the technology to reach out beyond the school walls and ‘socially network’ – using the latter term in its wider sense of ‘a network of social interactions and personal relationships’ (OED).

What one sees is a natural, largely unprompted change with the school becoming increasingly aware of the nature of the teaching, learning and digital resourcing outside the school walls, and the educational – and indeed social, economic, administrative and promotional – benefit of the school and its homes collaborating more closely in the holistic teaching of the young (Project Tomorrow, 2011).

Invariably the initial moves will be diffident, by the homes, community and the school, with it often being two steps forward and one back but in time with the school showing by deed its genuine desire to collaborate and the wider school community recognising the old barriers have been removed and the school gate opened the collaboration becomes normal and begins providing all manner of benefits.

With the collaboration comes:

The collaboration will, from the experiences of the pathfinder schools place an extra load on the school and the principal in particular. However over time the astute all- pervasive use of the digital technology will help lessen that load.

Almost inevitably there will be teething problems, dealings with over enthusiastic parents that will likely incline the principal at times to say ‘forget it’, but that downside is more than offset by the immense contribution the homes and the local community will bring to the school’s teaching, operations, its resourcing and its continued growth, and the continued evolution of an increasingly powerful and productive school ecosystem.

When schools open their doors, involve the parents in the school and genuinely collaborate with them in the 24/7/365 teaching of their children the nature of the schooling will be irrevocably transformed, with the parents forever onwards expecting to be involved in all the school’s work – and not shut out and disempowered as in the past.