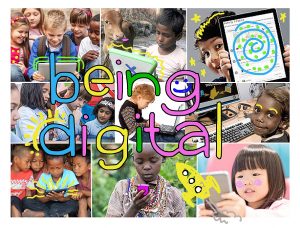 In 1995 Nicholas Negroponte wrote in his seminal work of ‘being digital’.

The book didn’t define what was meant by ‘being digital’, but simply exemplified what it was likely to mean.

Twenty plus years later, and the movement from an analogue to digital society and with more than half the world digitally connected we can go a long way to clarifying what is ‘being digital’, and to attest why the growth of this capability is critical to the life and education of world’s young, from birth onwards.

Over the last twenty plus years, but particularly the last ten society worldwide has largely unwittingly adapted it ways to accommodate the Digital Revolution and naturally evolved a mode of learning with the digital, from birth onwards (Lee and Broadie, 2018).

It is the state of being digital.

It is already core to the young’s learning worldwide outside the schools, on trend to grow in importance as the digital technologies evolve, becomes increasingly sophisticated and powerful, and digital ecosystems underpin virtually all areas of learning.

It is far more than digital proficiency. While dependent on that proficiency, it is a mindset, a mode of thinking, an expression of values, a set of ever rising expectations, an ability to draw on many connected elements, a way of learning and understanding how to learn, a taking charge of one’s own learning, being able to network, to accommodate accelerating change, to continually grow the capabilities and to use them 24/7/365, lifelong.

It is a suite of linked attributes that will naturally evolve in harmony with the evolving digital technologies, technological practises and changing social mores.

It is a suite that simultaneously draws upon and enhances the other areas of learning.

It is moreover a suite that while containing many common features is individualised, with each child in being digital having the capabilities needed to pursue their interests and passions.

It is most emphatically far more than a variant of handwriting or digital literacy.

It is a connected way of learning that is richer, higher order and more diverse, which can amplify all the non-digital learning interactions.

As the children within digitally connected families grow, mature, develop their cognitive, inter and intrapersonal abilities, become sexually aware, build relationships, socially network, operate at a higher order of thinking and continually attune their ways to the evolving technology so they will develop their own form of being digital – and will continue doing so, in subtly different ways, at the various stages of life.

Being digital as a low caste child in Mumbai, a Masai herder’s boy, a seven year old girl in Riyadh, a ten year old in outback Australia, an Inuit teen or a sixteen year old in Vancouver, Seoul, Sao Paulo or Edinburgh will in many ways be different. But that said all those young people will also have many common attributes, not least is being digitally connected and able to take charge of their learning with the digital lifelong – albeit in their respective cultures, outside the classroom.

The global variability, the continual evolution, and the individualised and highly integrated nature of being digital should quash any moves by education authorities to try and assess the capability, and particularly to try and compare student attainment nationally and internationally. But let us be clear and affirm that the billion plus digitally connected young have never had need for their being digital to be formally assessed (Lee and Broadie, 2018) and that it would be educationally invalid, inappropriate and unnecessary to do so.

Rather let’s recognise what being digital is, and appreciate that in many respects it mirrors the development, importance and the way schools handle children’s ability to speak.

They both grow naturally from birth onwards, if not earlier.

Both likely build on inherent capabilities. With speech those inherent capabilities have been obvious for thousands of years.  Being digital draws extensively, particularly with the very young, upon what has been for centuries a largely dormant visual intelligence (Strom and Strom, 2009) that was most obviously brought into play from 2007 and the release of the various touchscreen technologies. While employed increasingly from the 90’s the visuals controls of the iPhone were a game changer, allowing all the young, and not just the teens to readily use and learn with the technology (Lee and Broadie, 2018).

The visual cues on the touchscreen suddenly made it simple for those in the first year of life to mimic their parents and siblings use of the technology, and by the age of three to largely establish the approach to learning with the digital they would use lifelong. By three most children born into digitally connected families will have normalised the 24/7/365 use of the digital, to the extent its use is so natural as to be invisible.

Both are of critical educational importance in a digital economy, and need to underpin all learning.

Tellingly both have been naturally grown by the family, with government and its pre- schools and schools playing a limited or no part, except with children who have difficulties.

Tellingly – but invariably forgotten – in an era where the focus is on the basics and testing the young’s ability to speak has rarely been rarely formally assessed. The development has been left to the family.

The big difference between the two vital capabilities is that while the importance of speaking has been understood for literally thousands of years the educational centrality of being digital is a long way from being fully appreciated by most in authority.

Most governments and schools worldwide have over the last twenty to thirty years have tinkered with aspects of learning with the digital. They have focussed on some of the parts and never the totality of being digital. They have toyed with programming, web design, learning to use Office, cyber safety and more recently coding, but only ever within the school walls, always deciding which aspects of being digital are appropriate to be taught and assessed – and which should not.

It is difficult to find schools that have naturally grown Negroponte’s concept of being digital.

It is similarly difficult to find schools or education authorities who recognise being digital is a state of mind, with immediate access to an integrated suite of digitally based capabilities, coupled with the facility to use any of the capabilities and the understanding of how to learn when desired 24/7/365. They seem not to have grasped that the suite has evolved naturally, been individually shaped and can’t – like the facility to speak – be validly measured.

They most assuredly haven’t been formally recognised in their teaching, assessment or resourcing the young’s being digital outside the school walls, or the central role the digitally connected families of the world have played over the last twenty plus years (Lee and Broadie, 2018) in facilitating and supporting the growth of that development.

It is time this critical capability is seen, understood and accorded the kind of recognition given the ability to speak, and the educational, social, economic and logistical implications of being digital addressed as part of a wider contemporary education.

The latter we’ll tackle in a follow up article.

With the advantage of hindsight and historical analysis (Lee and Broadie, 2018) there might be value in pursuing the reading example further, accepting with being digital that the die will be largely cast by the age of three, that the young of the world will lifelong employ in their use of and learning with the digital the suite of attributes associated with being digital – regardless of what government of schools might desire – and leave the core digitally based education to the families.

It is a radical thought, with immense implications, but there is much to be said for formal education complementing and adding value to the work of the digitally connected families, and ceasing senselessly trying to compete with the families in growing the young’s ‘being digital’.

At this point in history ask any digitally aware parent or grandparent what they understand by ‘being digital’ and they’ll likely quickly grasp the concept, but initially only at a rudimentary level, and that it will likely be only when prompted will they appreciate the many linked universal elements and their significance.

The same folk will likely also pick up the reality that they – like the other 3.65 billion plus digitally connected of all ages are also ‘being digital’. While the strength will vary let’s remember there will be seventy year olds who have played a lead role in using and learning with the digital since the 1970’s who in their thinking and actions have long ‘being digital’.

The new but largely unrecognised reality is that in the twenty plus years since Negroponte postulated being digital the world’s digitally connected peoples have become so.