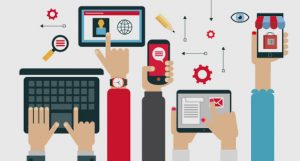 From the introduction of the World Wide Web in 1993 the young of the world have experienced two models of digital education, that outside the school walls and that within.

Outside the young and the digitally connected families of the world employed –  unseen – the naturally evolving laissez faire model.  Within the school the young worked within the traditional, highly structured model.

It is time the difference is understood, the global success and benefits of the laissez faire recognised and lauded, and the serious shortcomings of the highly structured understood and addressed.

For much of the period the two models ran in parallel, with most schools showing little or no interest in the out of school digital education.

Around 2010 – 2012 the scene began to change when a handful of digitally mature schools began genuinely collaborating with their families in the 24/7/365 digital education of the children.  Those schools had reached the evolutionary stage where their teaching model and culture closely mirrored that of the families. They revealed what was possible with collaboration.

That said it took time for that collaboration to take hold more widely and for the most part the parallel models continue in operation today, with the difference between the in and out of school teaching growing at pace.

It is surely time for schools and government to question the retention of the parallel modes and to ask if taxpayers are getting value for the millions upon millions spent solely on schools when the digitally connected families receive no support.

Might it be time to employ a more collaborative approach where the schools complement and add value to the contribution of the families?

Without going into detail, it bears reflecting on the distinguishing features of the learning environment and digital education model, of both the digitally connected family and the school, and asking what is the best way forward,

That of the families we know well. It has been built around the home’s warmth and support, and the priority the parents attached to their children having a digital education that would improve their education and life chances. The focus has always been on the child – the individual learner – with the children from the outset being provided the current technology by their family and empowered to use that technology largely unfettered.

Importantly the family as a small regulating unit, with direct responsibility for a small number of children could readily trust each, and monitor, guide and value their learning from birth onwards, assisting ensure each child had use of the current technology and that the use was wise and balanced.

The learning occurred within a freewheeling, dynamic, market driven, naturally evolving environment, anywhere, anytime, just in time and invariably in context. Those interested could operate at the cutting edge and the depth desired.

Very early on the young’s use of the digital was normalised, with the learning occurring as a natural part of life, totally integrated, with no regard for boundaries

The time available to the digitally connected family was – and continues to be – at least four/five times greater than that in the school.

It was to many seemingly chaotic, but also naturally evolving.

Very quickly the family learning environment became collaborative, socially networked, global in its outlook, highly enjoyable and creative where the young believed anything was possible.

By the latter 2000’s most families had created – largely unwittingly – their own increasingly integrated and sophisticated digital ecosystem, operating in the main on the personal mobile devices that connected all in the family to all manner of other ecosystems globally.

The general feature of the school digital learning environment has been invariably one of unilateral control, where the ICT experts controlled every facet of the technology and its teaching.

They chose, configured and controlled the use of both the hardware and software, invariably opting for one device, one operating system and a standard suite of applications.

The school knew best. The clients – the parents and students – were expected to acquiesce.  There was little or no recognition of the out of school learning or technology or desire to collaborate with the digitally connected families.

In reflecting on school’s teaching with the digital between 1993 and 2016 there was an all-pervasive sense of constancy, continuity, with no real rush to change. There was little sense that the schools were readying the total student body to thrive within in a rapidly evolving digitally based world.

The reality was that while the learning environment of the digitally connected families evolved naturally at pace that of most schools changed only little, with most schools struggling to accommodate rapid digital evolution and transformation.

With the advantage of hindsight, it is quite remarkable how hidden the laissez faire model has remained for twenty plus years, bearing in mind it has been employed globally since the advent of the WWW.

For years, it was seen simply as a different, largely chaotic approach used by the kids – with the focus being on the technological breakthroughs and the changing practices rather than on the underlying model of learning that was being employed.

It wasn’t until the authors identified and documented the lead role of the digitally connected families of the world did we appreciate all were using basically the same learning approach. The pre-primary developments of the last few years affirmed the global application of the model.

We saw at play a natural model that was embraced by the diverse families of the world.

All were using the same model – a naturally evolving model where the parents were ‘letting things take their own course ‘(OED).

The learning was highly individualized, with no controls other than the occasional parent nudge. That said the learning was simultaneously highly collegial, with the young calling upon and collaborating with their siblings, family members, peers and social networks when desired.

Interestingly from early on the young found themselves often knowing more about the technology in some areas than their elders – experiencing what Tapscott (1998) termed an ‘inverted authority’ – being able to assist them use the technology.

Each child was free to learn how to use, and apply those aspects of the desired technologies they wanted, and to draw upon any resources or people if needed.

In the process the children worldwide – from as young as two – directed their own learning, opting usually for a discovery based approach, where the learning occurred anytime, anywhere 24/7/365. Most of the learning was just in time, done in context and was current, relevant, highly appealing and intrinsically motivating. Invariably it was highly integrated, with no thought given to old boundaries – like was it educational, entertainment, communication, social science or history.

In contrast the school digital teaching model has always been highly structured and focused on what the school or education authority ‘experts’ believed to be appropriate.

Throughout the period the teaching has been unilaterally controlled, directed by the classroom teacher, with the students disempowered, distrusted and obliged to do as told.

The teaching built upon linear, sequential instructional programs where the digital education was invariably treated like all other subjects, shoehorned into an already crowded curriculum and continually assessed.  Some authorities made the ‘subject’ compulsory, others made it optional.

The focus – in keeping with the other ‘subjects’ in the curriculum – was academic. There was little interest in providing the young the digital understanding for everyday life.

The teaching took place within a cyber walled community, at the time determined by the teaching program.

Increasingly the course taught and assessed became dated and irrelevant.

In considering why the young and the digitally connected families of the world have embraced the laissez faire model of digital education aside from the young’s innate curiosity and desire to learn we might do well to examine the model of digital learning we have used over the last twenty plus years and reflect on how closely it approximates that adopted by the young.

Might they be following that ancient practice of modelling the behaviour of their parents?

Let us all finally recognise the core qualities and the remarkable global success of the laissez faire digital education model and build upon its achievements.