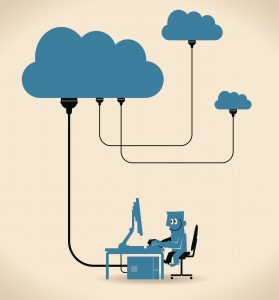 An oft forgotten but increasingly important aspect of digital evolution and creating the desired increasingly effective and productive school ecosystem is the digitization of the school administration. In the same way, the move to a digital operational paradigm obliges the school to markedly transform its culture, organizational structures, teaching and communications so too it needs simultaneously to develop an administration appropriate for an ever evolving digital and socially networked school, and society.

Within the traditional, highly segmented, paper based school with its pronounced division of labour, where most of the administration and communication was handled by the ‘office staff’ school administration barely rated a mention in the literature on the school development.

It was a largely ancillary operation that most educators, including many in leadership roles, knew or cared little about.

All that changes and changes significantly when the school moves to a digital operational mode and creates a tightly integrated digitally based ecosystem.  The old divisions of labour are blurred and the internal walls are lowered or removed as the educational and the administrative operations are seamlessly intertwined. Educators who previously needed the services of an administrator to carry out a task can now usually do the task themselves, while administrators who previously required teachers to be involved in the process of communicating administration functions to pupils and parents and in following up to ensure completion can now often do this directly.

The digitization of the administration directly impacts the growth and evolution of the total school ecosystem, and helps drives the increased productivity, effectiveness and efficiency of all school operations, educational as well as administrative. An increasingly sophisticated, integrated, effective and secure, client focussed, user friendly digitally based administration is critical in helping position the school for continued growth and the enhancement of learning.

It thus vital from the start of the evolutionary journey the school leadership factors into the shaping of the desired totality the apt digitization of the school administration, linking it integrally with all the other developments.

The modifier ‘apt’ is very important. Invariably schools have for years made greater use of the digital in the administration than in their teaching, but while usage is invariably spotted, silo like and seldom tied to the creation of the desired culture and ecosystem and the realisation of the school’s shaping vision.  It needs to be. Forty years ago, Mal was associated with the digitization of the student assessment in the Australian Capital Territory’s secondary colleges.  It was rightly seen as an administrative breakthrough but was not directly linked to the creation of an integrated learning environment. The same continues to happen today.  Indeed, many of the moves with administrative systems, particularly those imposed on schools by government and education authorities work to create a culture antithetical to that the school is wishing to create.

It is very important to both choose and configure systems that support the school’s shaping vision.

It is moreover important to employ digital systems that also enhance the school’s productivity, and minimise the administrative load of the users, the staff and the clients. Sadly, the history of the use of the digital in school administration is characterised by the rhetoric far exceeding the reality and the inability of the technology providers to deliver their promises. While great advances have been made in recent years and there are some highly sophisticated and effective apps and Cloud services schools can use, all too often schools globally are obliged to use systems that add to the user’s workload and frustration.

Going digital is not some magic panacea. It must be done well, always supporting the realisation of the school’s shaping educational vision.

Schools should work from the outset on the assumption that the school will want not only to astutely digitize all its administration but also to have all its operations in a form, and with an appropriate level of security, where virtually every facet can be accessed 24/7/365.  Understand that you’ll want to;

The approach should be one of identifying who is the most appropriate person to have responsibility for a task and to enable that person to complete the whole task, communicating with and involving others digitally as appropriate. Junior people are enabled to take greater responsibility while senior people can avoid putting loads onto others through being able to time-effectively complete those parts of the task they have previously delegate to others

In going digital, and networked the school has always to be conscious of the security of the services. But in saying the school should also be realistic and nuanced, and identify which administrative processes can be made freely available to all and which need some degree of security.

While the initial digitization moves should rightly be the shift away from the paper based practises allied should be the replacement of dated non Web based systems with those than can be accessed anywhere, anytime 24/7/365.

Carefully scrutinise the school’s continued use of any tailored digital systems, particularly those hosted by the school that might be better performed, more cheaply by Cloud based services.

It is appreciated that many schools will be obliged to use systems dictated by government.  Bureaucracies have become very adept at using the networked administrative systems to control and micro manage ‘their’ schools.

Do your utmost to take charge of the school’s digitized administration and communication, and adopt solutions that advance the creation of the desired ecosystem and culture, understanding that at times the school will be obliged to use the mandated systems.

Set the goal of providing your staff and clients with a digitized administration at least on par with the best SME offerings, that continually reduces their workload while simultaneously improving the intuitively, efficiency, effectiveness, economies and productivity.

Recognise with the digitization of the administration you will likely experience, like elsewhere in the ecosystem, both the intended and unintended benefits, but also going on experience undesirable disbenefits. While the unintended should be optimised, the disbenefits will have to be removed.

While left to the end in this series the digitization of the school’s administration is no less important in the total scheme of things than any other of the many variables flagged for attention.

Indeed, in many respects the school’s app and its Web based administration will likely be many clients first encounter with the school.

Failure to get the administration to the level expected by a digital society and the school’s image will be markedly damaged and the school’s facility to offer an apt education for a digital and socially networked world seriously questioned.

It is a vital performance indicator.